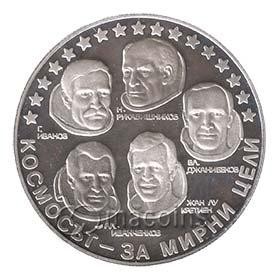 The obverse depicted the logo of the joint Bulgarian – Soviet flight with an inscription “Intercosmos”. Below is the year of issue – 1985 and the nominal value of 10 leva. In the outer circle of the coin has an inscription “Peoples Republic of Bulgaria” and are written five stars.

The reverse side depicted a face head of the five cosmonauts who take part in the first space flight. In the outer circle of the coin has an inscription “The cosmos – for a peaceful world” and are written 17 stars.

Related links to "Intercosmos"
Viewed
This website uses cookies to give you the best possible functionality.
Ok, got it