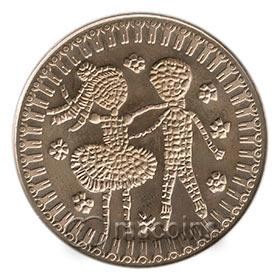 The obverse depicted the logo of the Assembly. Around has an inscription “International Childrens Assembly Banner of peace Sofia 85”. Below has an inscription “Peoples Republic of Bulgaria”, the year of issue – 1985, the nominal value of 5 leva and drawing 8 bells.

The reverse side depicted little girl and a little boy embracing each other. Around them are drawing seven flowers.

Related links to "Third International Children's Assembly, Sofia (Bulgaria), 1985"
Viewed
This website uses cookies to give you the best possible functionality.
Ok, got it