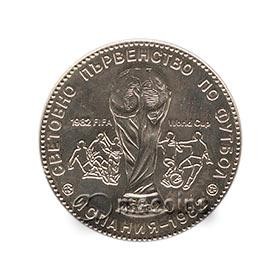 The obverse depicted Bulgaria coat of arms. On both sides is the year of issue – 1980.Below is the nominal value of 1 leva. In the outer circle of the coin has an inscription “Peoples Republic of Bulgaria” and “Leva”.

Related links to "World Football Championship, Spain, 1982. Quality - proof"
Viewed
This website uses cookies to give you the best possible functionality.
Ok, got it