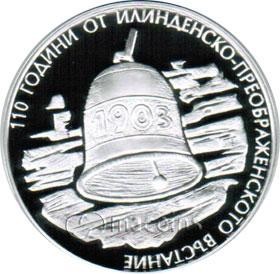 Description
Description
The obverse of the coin depicts two female figures surrounded by a wreath at whose feet lies a... more
Close menu
Product information "110th Anniversary of the Ilinden-Preobrazhenie uprising"

The reverse side was written the year “1903” on the bell, which symbolizes the awakening of nation. In the outer ring of the coin has an inscription "110 years Ilinden–Preobrazhenie Uprising”.

Related links to "110th Anniversary of the Ilinden-Preobrazhenie uprising"
Viewed
This website uses cookies to give you the best possible functionality.
Ok, got it