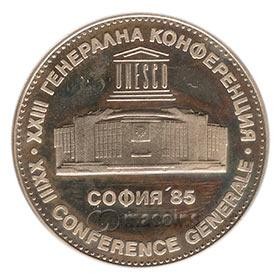 The obverse depicted Bulgaria coat of arms. On the both side depicted Thracian chariots. In the outer circle of the coin has an inscription “Peoples Republic of Bulgaria”, the year of issue – 1985 and the nominal value of 5 leva.

The reverse side depicted the building of the National Palace of culture. Below has an inscription “Sofia 85”, above is the logo of UNECKO. In the outer circle of the coin has an inscription “XXIII Conference generale” written at the Bulgarian language.

Related links to "23rd UNESCO General Conference, Sofia (Bulgaria)"
Viewed
This website uses cookies to give you the best possible functionality.
Ok, got it