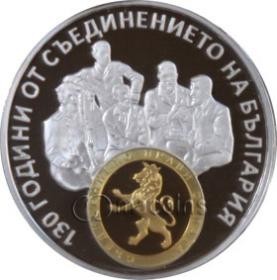 Description
Description
The obverse depicts the emblem of BNB and the year of its establishment (1879).... more
Close menu
Product information "130 Years since Unification of Bulgaria"

The obverse depicts the emblem of BNB and the year of its establishment (1879). “Bulgarian National Bank” and the year of emission (2015), as well as the face value (10 BGN) are inscribed in a circle.

The reverse depicts some of the members of the Bulgarian Secret Central Revolutionary Committee. Below them, in a gilded circle, the lion from the flag of the Golyamo Konare detachment is depicted, along with their slogan “UNITY MAKES STRENGTH“. The external ring of the coin has an inscription “130 years since the Unification of Bulgaria".

Related links to "130 Years since Unification of Bulgaria"
Viewed
This website uses cookies to give you the best possible functionality.
Ok, got it