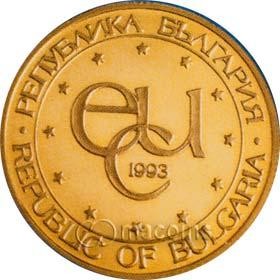 The obverse depicted  the first three letters of the Bulgarian alphabet “A Б B” against the background of letters of the Glagolitic and Cyrillic alphabets. To the left is the nominal value of  5 000 leva.

The reverse depicted the currency of the European Community "ECU” and the year of issue - 1993. It has about 12 stars. In the outer ring has an inscription in English and Bulgarian „Република България” и „Republic of Bulgaria”.

Related links to "Republic of Bulgaria's Association with the European Community - Alphabet"
Viewed
This website uses cookies to give you the best possible functionality.
Ok, got it